[D&D] Under the influence of art

As I've mentioned before, I was part of the second (or even third) generation of D&D kids, and didn't have much notion of fantasy before starting to play D&D (outside of Disney movies and fairy tales and He-Man) and I didn't really get into reading fantasy fiction (outside of The Hobbit, a book of King Arthur stories from my school library, and TSR's own Endless Quest series) until a bit later, so for the first two years or so my idea of fantasy and sense of "what fantasy looks like" was very heavily influenced by D&D and, especially, D&D art.

Alongside the canonical TSR artists (who, thanks to TSR's practice at the time of keeping old material in-print, I got the experience several generations of simultaneously - from David Sutherland, David Trampier, Tom Wham, Darlene, Erol Otus, Russ Nicholson, Jeff Dee, Bill Willingham, Timothy Truman, Jim Holloway, Larry Elmore, Jeff Easley, Keith Parkinson, and Clyde Caldwell all side by side by side) there was also some ancillary licensed stuff that was influential on me.

Back in the 80s, when D&D was a fad and everybody was anxious for a piece of that money, there was a lot of licensed, non-game D&D branded stuff (jigsaw puzzles, posters, beach towels, etc.). By 1983-84 that material generally featured either the characters from the AD&D toy line or reproductions of the same handful of book covers by Larry Elmore and Jeff Easley. But if you go back a couple years further, things get more interesting and there were some unique, now mostly-forgotten D&D-branded items floating about.

One that I never actually owned but that had a subconscious impact from seeing (and coveting) older kids' copies was a line of D&D-branded folders and notebooks released in 1981-82 by St. Regis Consumer Products. There were a dozen or so different designs, all by an artist named Alex Nuckols (who is, apparently, mostly known for paintings of Jesus guiding 18-wheelers that were sold in truck-stops in the 70s). Unfortunately I can't find any good sample images to post (thanks to Photobucket changing their terms of service), but you can Google image search on "d&d st regis" and come up with a few. The art is very much in the same style stuff like the Brothers Hildebrand and Ralph Bakshi's Lord of the Rings, or perhaps Rankin & Bass' The Last Unicorn, and doesn't really have anything specific to do with D&D (no identifiable monsters or anything) so it was probably pre-existing fantasy art that got the D&D logo stuck on it as a quick cash-grab, but it's still pretty cool (and I wouldn't mind having a couple of those folders today).

[Actually, here's one of the pieces - hope this link still works!] 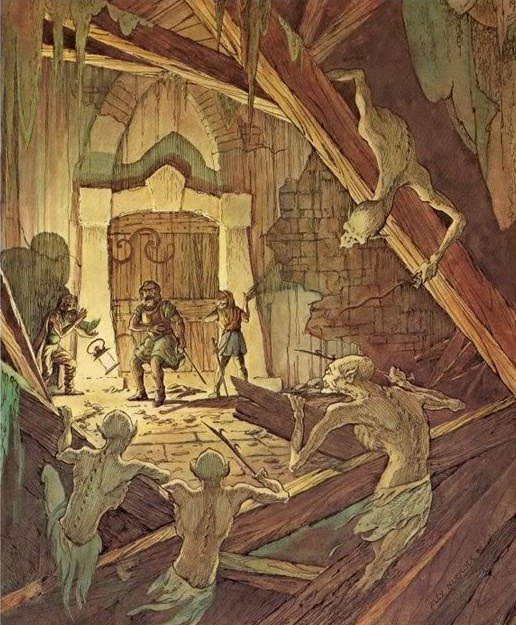 Another item that I did have was the sets of AD&D-branded "rub down" transfers (a la PrestoMagix - one of those genres of kids' toys that has since completely disappeared). These were apparently released in 1981, but I found them sometime around the spring of 1985 in the gift shop at the King's Island amusement park in Cincinnati (where I guess they'd been gathering dust for awhile?). There were several sets, each of which had about a dozen images that were drawn mostly from the Monster Manual, Fiend Folio, or Players Handbook, but rendered in full color. These were very cool to me - the combined familiarity of the images with the novelty of them being in color (and transformed from book illustrations to stand-alone figures) seemed "right" to me and really struck my imagination. I don't remember what I actually did with these - I know I didn't keep them unused, but I didn't put them into my actual D&D books, either. I think I must have drawn landscape scenes on blank paper which I inserted them into. Here's one of the sets I had:

Here's another one that I didn't have (there were 8 different sets in total; I think I had 2 or 3) but that is still a pretty cool selection of some of the most iconic AD&D monsters:

And last but not least is another item that was even older (released in 1979), but that my best gaming buddy at the time picked up "new" at a flea-market I think sometime around the summer or fall of 1985, and that we spent a lot of quality time with and was very influential on my mind's eye picture of D&D: the Official Advanced Dungeons & Dragons Coloring Album, with illustrations by Greg Irons and text by Gary Gygax.

This item has already been "rediscovered" by bloggers and gotten a fair amount of attention in recent years, including a blog post from 2011 that included the entire book (both text and pictures), but I still want to talk about it a bit, both because it was so cool and because thinking back it's likely that having spent so much time at this impressionable age with my friend and this book, reading Gary's text and carefully coloring the images to match it, as well as playing with those rub-down transfers of Trampier and Sutherland art, at the time when the look and feel of the official game was rapidly moving in a very different direction, is a big part of why my D&D tastes and aesthetic preferences were out of step with what TSR was offering up in the post-Gary era and why I gravitated towards the "old school" Gary-era aesthetic, even as it was disappearing from (and in some sense being actively repudiated by) TSR's official product lines.

Greg Irons was an underground comix and tattoo artist out of San Francisco, and his work didn't look like anything from the TSR art department, but - especially in combination with Gary's text - it still fit the mood of the game perfectly. The purpose of a coloring book is, of course, to present tableau images that will be fun to color in, so Gary's "story" is really just an excuse to set of a series of these tableaux, but he included enough detail and evocative flavor in those paragraphs to make it interesting, and to make sure that the subject matter wasn't just repurposed generic fantasy art, but was extremely specific to the AD&D universe. All of the characters and monsters come straight out of the game, and even though the style of the art is different than the rulebooks, the imaginary world being portrayed is unquestionably the same: 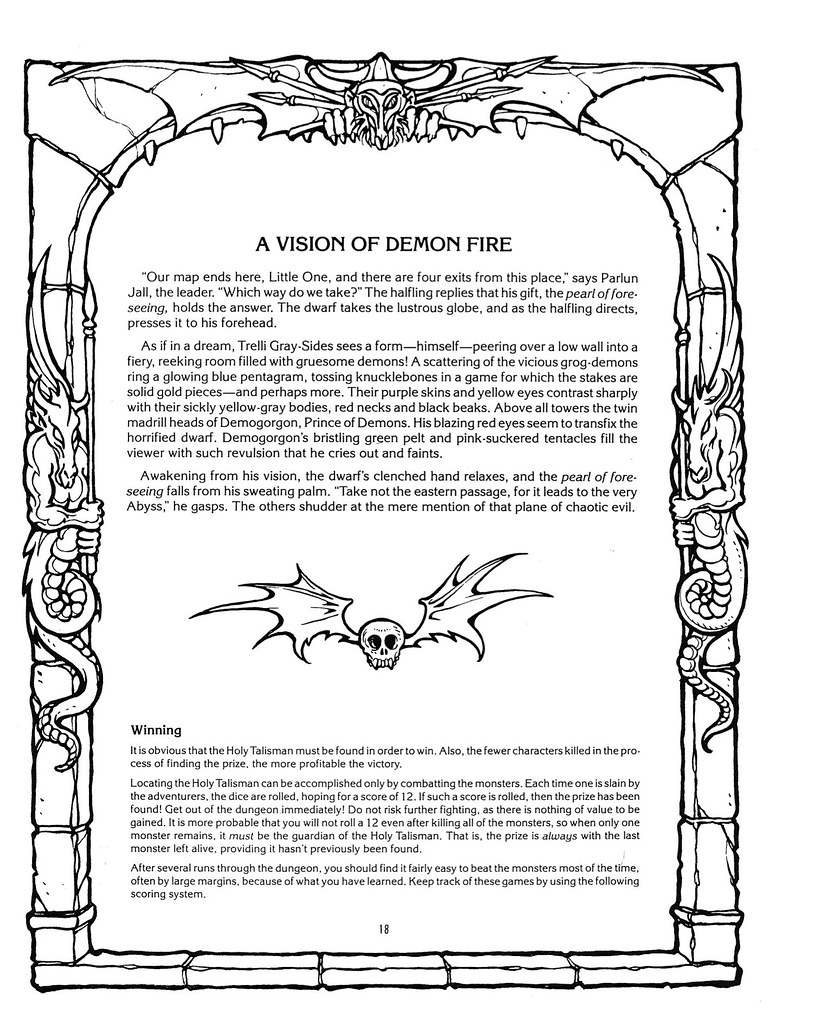 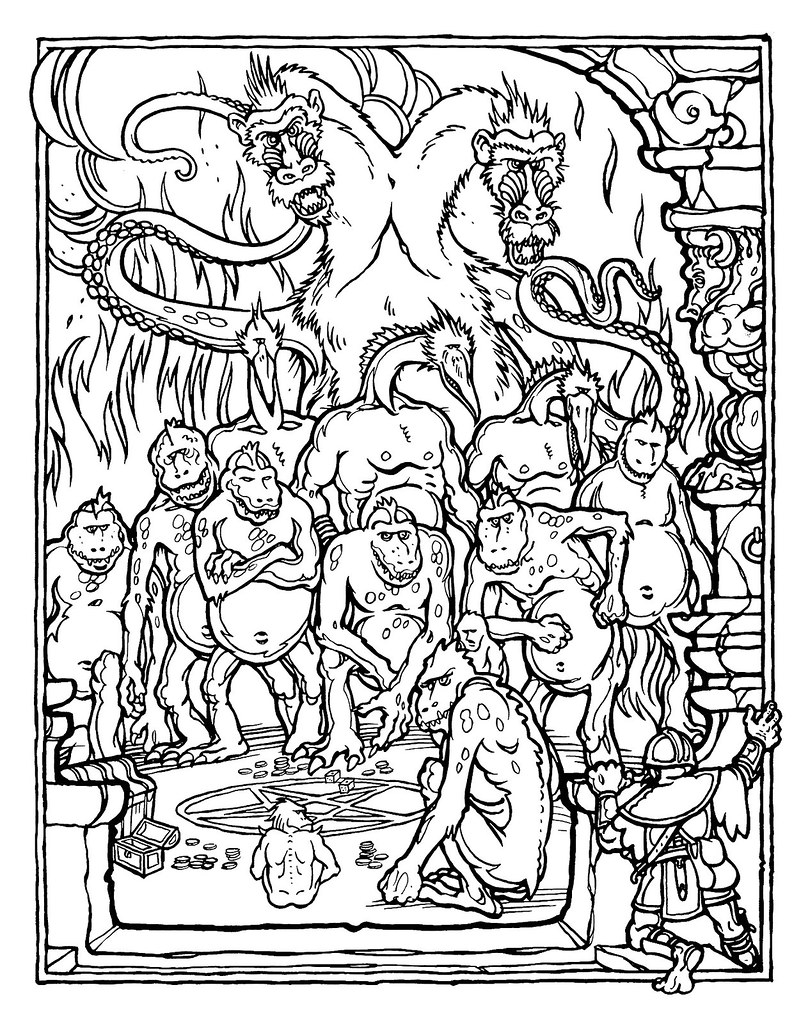 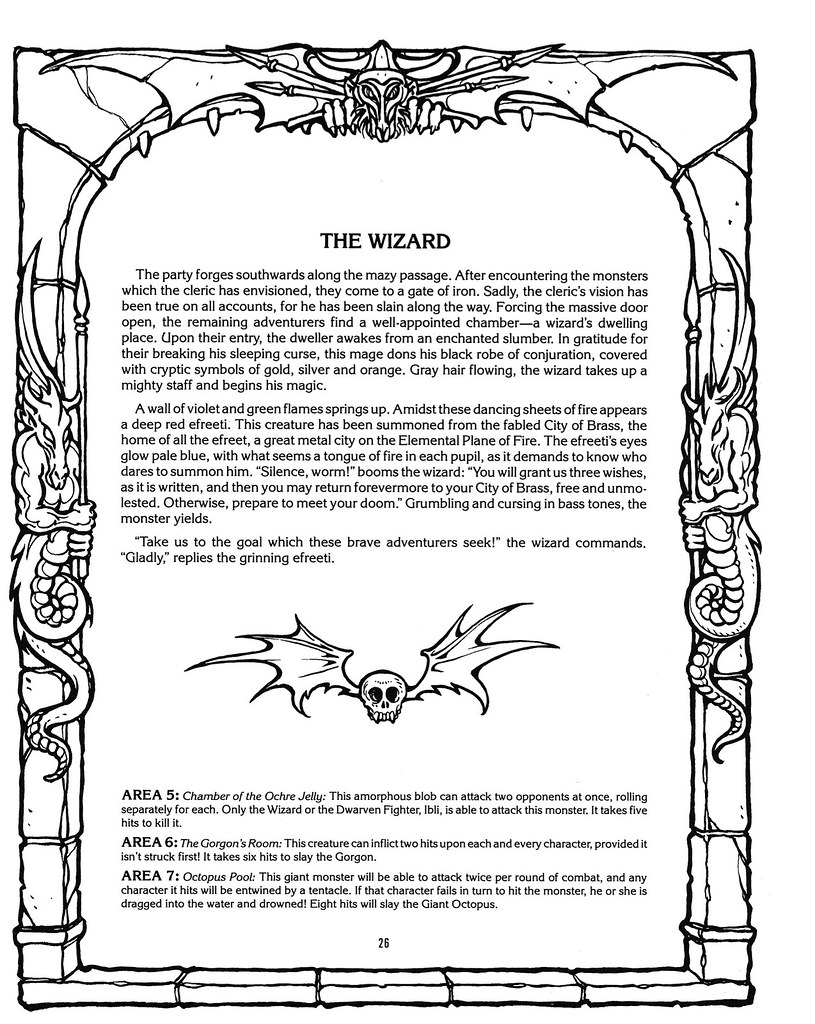 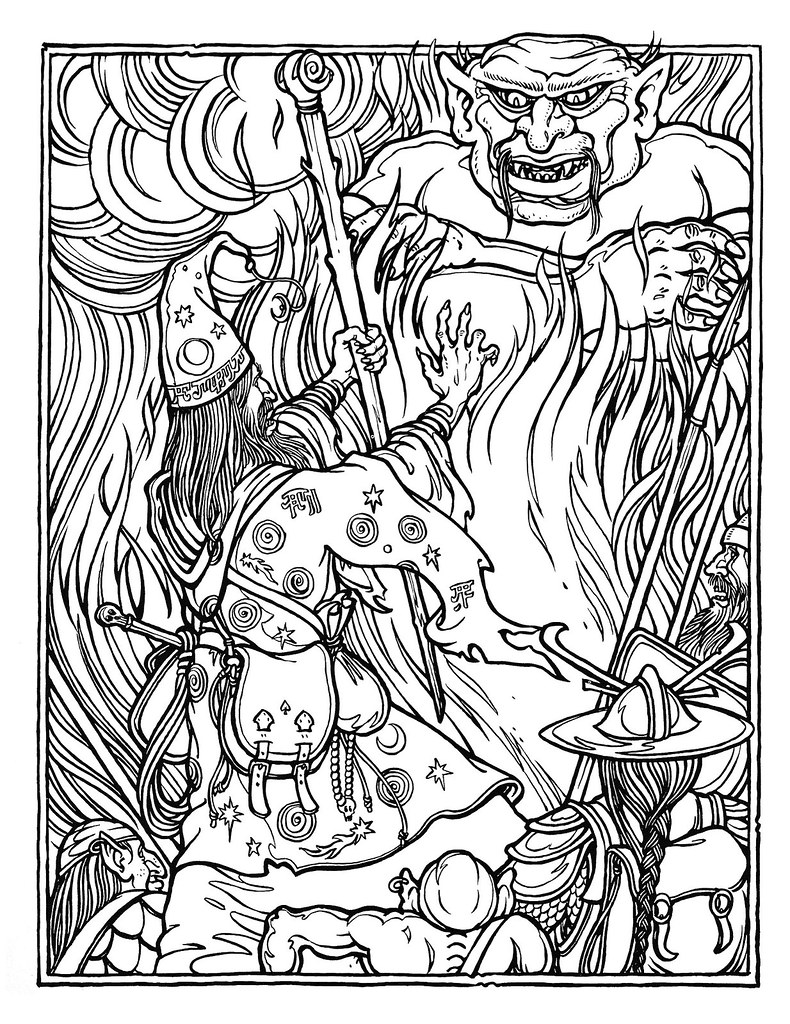 (Alas, one downside of the amount of fun my friend and I had with this coloring book is that once we had filled it up we went on to start coloring in the illustrations of the actual D&D modules - especially those illustrated by Jim Holloway, Jeff Dee, and Bill Willingham, including my otherwise-highly-collectible copy of R1: To the Aid of Falx...)

So all of that D&D art - the canonical TSR art, plus the AD&D toys, plus the D&D cartoon (especially those monsters that came out of the game - the orcs and bullywugs, shadow demon, Tiamat, etc.), plus these licensed oddities - are and always will be "what D&D looks like" in my imagination. And that association, as much or more as all of the changes made to the rules (which, as the books always told us, were really just a set of guidelines, suggestions, and examples anyway) is the reason why I've never been able to embrace the Wizards of the Coast editions of D&D. No matter what they call it, or how hard they try to play the nostalgia card, nothing they do ever looks or feels "like D&D" to me :(
Posted by Trent at 12:00 PM